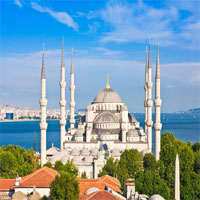 Turkey is the land which touches East and West at same time and have blend of modern and old civilization. Turkish people are very friendly while this country contains many outstanding resorts and tourist spots. Western Turkey is an outstanding in its beauty and attraction which demands more time to visit this particular area. There are various top rated visiting sites in Turkey those attracts the visitors from all over the world whose visit for their pleasure and knowledge. Turkey is the combination of old and latest modern civilization and the old civilization is a remarkable history. There are various monuments in Turkey those invites the tourists to visit them because of their beauty, durability and uniqueness in world. There is a detail and long list of sites in Turkey those must be visited by the foreign visitors and history students from all over the globe. Turkey is a blend of two main eras just as old civilization and modern or current age. The following of some most visited sites in Turkey.

Aya Sofya
Aya Sofya is the fantastic building in the world, which is world outstanding museum, but once it was a church and former Ottoman mosque in Istanbul. This building is world recognized according to its structure and beauty. Hagia Sophia was built in fourth century by Constantine the Great, but now nothing original in this building. Hagia Sophia was reconstructed by Emperor Justinian I in between 532 and 537. After, 1453 Sultan Mehmet entered in this city and he was amazed by the beauty of this building and changed its status as imperial mosque. It remained mosque for about 500 years, Hagia Sophia was renovate in 1847 to 1849 and it was decorated interior and exterior. In 1934 Kemal Atatürk the Turkish president changed this mosque into the Ayasofya Museum.

Ephesus
Ephesus remained under the control of Greek, Persian, Roman, Byzantine and, finally, Ottoman, but this city remained as classic. This is located in Turkey western coast and it is very famous busy seaport which transport goods from Asia to Greece, Italy and other parts of the world. This city is familiar all over the world because of its temple to the goddess Artemis. It is among the seven wonders of the ancient world. Currently, it has few columns are all that remain of that temple. However, there are various things to see just as a three-tiered theater, which is on the slope of hill and the city stands the Church of Saint John.

Cappadocia
The word Cappadocia comes from Hittite language which means the land of beautiful horses, this the combination of mountains and plains in eastern central Anatolia. The main characteristic of Cappadocia is red sandstone and salt deposits. There are many sites in this city to visit just like Fairy Chimneys, Göreme Valley National Park and rock churches, Derinkuyu or Ozkonak, underground cities of Kaymakli, Zelve Valley and Pasabag, Avanos with its pottery and carpets, Uçhisar rock fortress, Ortahisar rock fortress and Ihlara valley.

Pamukkale
Pamukkale is Turkey’s foremost mineral-bath spa contains hot calcium-laden waters spring, the historical antique pool is still there. Tourists and visitors from the world can swim in this pool through a ticket. This is Turkey’s most famous natural wonders, which is covered by white sand, but have green out fields a natural view from this site. This site easily accessible through car or by bus.

Sumela Monastery
Sumela Monastery is the amazing visitors attraction side of the Black Sea coastline, this is about 1600 years old ancient orthodox monastery, which is situated at 1200 meters height on the steep at macka region of Trabzon Turkey. The monastery is approached through a path from the forest.